Hard Gainer Hacks, How to Build Muscle when you are an Ectomorph.

So, you're getting ready to start attacking the bulking phase. You've worked out your calories and know your Macro Split. Problem is, you are struggling with a lack of appetite and having a hard time getting the calories in. Typical of most ectomorphs, you have a slower digestive tract and a serious lack of appetite. This is where food choice is crucial. Pick a typical bodybuilder carb source such as sweet potato and what you'll find is you'll feel full after a meal..... too full.

I've been there myself and I know how soul destroying it is looking at a meal that you've only just started, knowing full well that in about two more mouthfuls you'll be struggling, sweating and worried that you're going to burst your stomach if you finish it (or attempt to finish it). 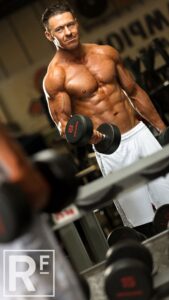 Before you commit ritual seppuku over your inability to eat enough, I have a few quick suggestions to make life easier all round.

So, there you have it my hardgaining brethren, some easy ways to ensure you are getting enough calories in to grow, without feeling like you need to vomit.

This website uses cookies to improve your experience while you navigate through the website. Out of these cookies, the cookies that are categorized as necessary are stored on your browser as they are essential for the working of basic functionalities of the website. We also use third-party cookies that help us analyze and understand how you use this website. These cookies will be stored in your browser only with your consent. You also have the option to opt-out of these cookies. But opting out of some of these cookies may have an effect on your browsing experience.
Necessary Always Enabled
Necessary cookies are absolutely essential for the website to function properly. This category only includes cookies that ensures basic functionalities and security features of the website. These cookies do not store any personal information.
Non-necessary
Any cookies that may not be particularly necessary for the website to function and is used specifically to collect user personal data via analytics, ads, other embedded contents are termed as non-necessary cookies. It is mandatory to procure user consent prior to running these cookies on your website.
SAVE & ACCEPT
WhatsApp us